How Visual Person Detection in Supermarkets could Improve Customer Satisfaction

A growing number of local businesses have to close down due to online competition resulting in dying downtown areas. To avoid further progress of this trend, it is crucial to increase customer satisfaction. As staff members are often busy restocking shelves and doing overlay work, they lack the time to assist customers with their needs. Smart shopping carts providing real-time information about their whereabouts as well as the general people-flow may provide some remedy with this issue. The shopping cart acts as a carrier for sensors, providing additional information to staff members. However, this project focuses on visual people detection which builds the foundation for people flow analysis. A prototype was built in order to investigate this topic further. The project leverages on Google’s TensorFlow framework for image processing and a Xbox Kinect for visual input, using a Rasp- berry Pi as the processing unit in between. Possible bottlenecks due to the limited processing power of the Raspberry Pi have also been investigated. The implementation has been tested on both, the Raspberry Pi 3B+ and the Raspberry Pi 4 8GB in order to collect performance data. By comparing this data, it was found out that there is a significant performance difference, which most likely results from the faster SOC and higher memory speed. The idea, to build upon the hardware of already existing smart carts shows promising results and could be investigated further. Person detection builds a solid foundation for a more complex algorithm implementing people flow analysis. The next step would be to utilize the depth sensor of the Kinect and send the actual coordinates to a central server, where they can be analyzed. Other use cases, such as detecting different objects, like products and animals, are also imaginable. An easy to implement example would be to detect animals and alarm employees as this is prohibited in most stores. Another possible use case would be to detect dropped products. For those more advanced use cases it would necessary to investigate whether a custom model is required or if a pre-trained model would be sufficient. The training of a custom model would require further knowledge about data collection and machine learning in general, as well as more computational power. 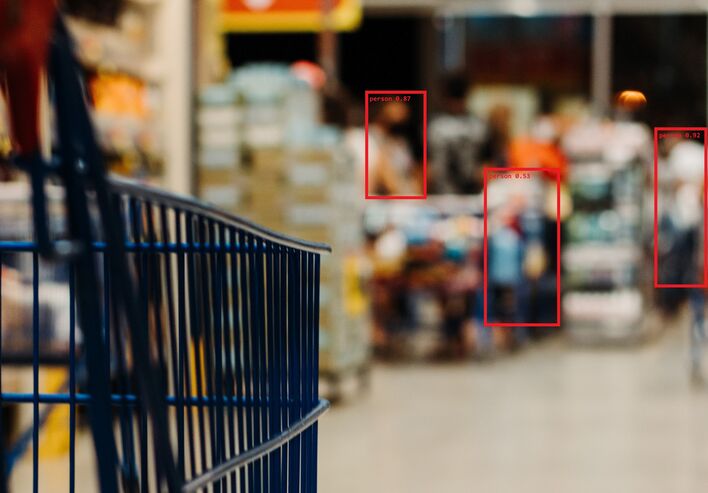